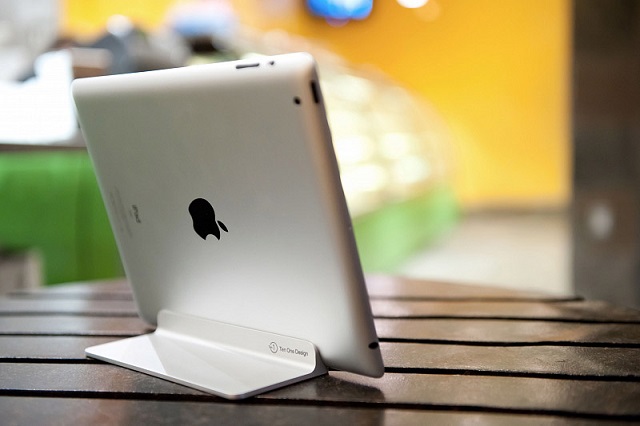 The TenOne Magnus Stand looks like it could have been designed by Apple specifically for their tablets, however the steep price is similar to what would usually make people opt for a non-Apple accessory.

The amazingly crafted aluminum design puts the stand far ahead of any plastic holder you may be tempted to buy, so don’t bother with them. You’ve spent at least £399 on a shiny iPad and you need a stand to reflect that, and that’s why you should avoid the plastic ones. They may be white thus matching Apple’s standard design scheme, but the poor material can’t be associated with a tablet designed for productivity.That’s what makes the TenOne Magnus stand so brilliant. The metal design is very classy, both in the way it looks and how it feels.

The Magnus stand is almost invisible from the front when the iPad is docked. That’s how well designed it is. The only thing you can actually see is the small metal line underneath the iPad, making it an extremely minimal accessory to have on your desktop. The back of the iPad dock isn’t much more noticeable, with only a small strip of metal up the back of the iPad and along the surface to hold it in place.

So how is the TenOne Magnus stand so minimal? Well it’s one of the very few stands to use magnets in holding the tablet in place. We have seen hundreds, if not thousands of cases which make use of the magnets designed for the Smart Cover, but have seen very few stands which use the same functionality, and it’s a wonder why. The magnets mean that the stand needs a lot less material to hold the tablet down, meaning it looks better and takes up less room.

I honestly struggle to find a problem with this stand. The magnets only work in landscape, meaning that although you can have your iPad in portrait, it won’t be as secure. And that’s it, that is the only actual problem I can find with the stand.

So i’m sure you can tell by now, that I love the TenOne Magnus stand for iPad. It’s stylish and works very well. It’s quite a large price for what it does, but in my eyes it’s one of the few stands that could rightfully match the iPad in style.

Cadbury Replicate Google Plus With Chocolate