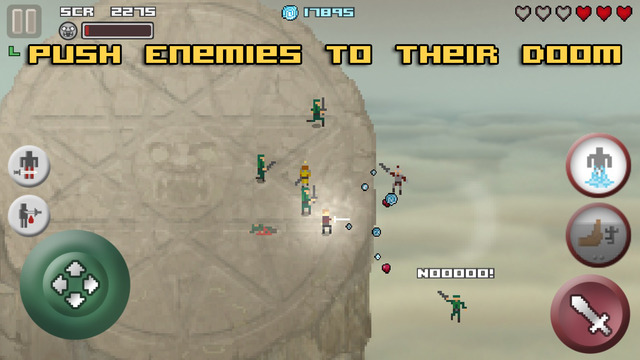 If the emergence of the app gaming market has taught us anything, it’s that nothing is out-of-bounds for developers. Where console and PC games are concerned, the creative teams behind the titles are a little more limited. These games are expensive to make and they are released far less frequently, so for the most part developers tend to stick to proven styles, franchises and, elements of game play.

In the app market, there is virtually no need for this kind of restraint. While the games can still be very expensive and time-consuming to make, they are still far easier to produce than most console titles, which means a flop one month could be followed with a success four months later. And whether because of this or purely due to creative diversity among app developers, we tend to see a lot of bold concepts making waves in the app stores.

These five developments in particular illustrate just how strange app gaming really is.

We live in an age of unprecedented graphical capability. Video games basically look like real life, and critics and players alike care almost as much about aesthetics as they do game play, but somehow or other, even in this environment, the app market has been taken over by games with intentionally old-fashioned – and sometimes downright crude – graphics. The very fact that there are lists of the best “pixel games” in the app store sounds absurd in 2015, and yet these are often some of the best games out there. Ridiculous Fishing, Canabalt, Only One, and even Minecraft! These are just a few examples of crazy popular app games with stunningly simple visuals there’s just something charming about the entire genre.

Most of us are pretty much done with in-person word games unless it’s a very specific situation. If your grandmother wants to play Scrabble over the holidays, you’ll probably go ahead and bust out the board. If you’re stuck on a runway waiting for takeoff, you may flip to the back of a magazine and try out some crosswords. But when was the last time you voluntarily played a word game just for kicks? I’m willing to bet it was on your smartphone.  From Words With Friends to Word Brain, and with plenty of games in between, there are a lot of titles in this category that have been shockingly popular on mobile platforms.

Casino games, too, are usually played primarily in a few specific circumstances. You might play when you’re, you know, actually at a casino. Or again you may play poker or bingo during a family game night over the holidays. It is no surprise that poker has made it big in the app gaming market, as it remains the maybe most beloved card game in existence, but the fact that other casino games – slots, roulette, and even bingo – have established footing on mobile platforms is a little more surprising. In part, it’s because the big developers and sites behind most apps in these categories have found fun ways of making them more creative and engaging than standard bingo cards and the like.  This site represents one of the busiest bingo platforms online or in app stores and features a range of themes with something for just about everyone. Through this kind thematic diversity, bingo and other simple casino games have found popularity again.

Pick a sports game, fighter, or RPG that you’ve either personally played or come across in app stores.  I’d be willing to bet it’s more about collecting characters and improving your team than actually playing the sport, or engaging in fights. The two most prominent recent examples are FIFA and Madden mobile versions, both of which are very heavy on team ownership and roster management features. Yes, you can still get on the field and play the games, but the real point of it all is to keep improving your teams so as to reach higher levels of competition and achieve more goals. It’s actually a clever way for mobile developers to take advantage of smaller screens and simpler controls, managing a roster is the same on mobile as it might be on a console, whereas the actual action of the games is a little more primitive.

There’s a growing perception that gaming in modern times is all about interaction and multiplayer. To an extent, this is easy to understand.  The console market is catering more and more to fans of multiplayer gaming, and even in apps there are a lot more player vs. player contests available, even some of the games mentioned or alluded to above come with their own online networks of players and full multiplayer capability. Oddly enough, some developers have also gone the other way with their apps, seeking to create immersive, wholly individual experiences for users.  This list of worthwhile app games shows a little bit of what I’m referring to, with titles like Device 6, 80 Days, and The Room all being mentioned. The (unofficial) category of narrative app games includes many more than just these titles but, also including some of the best-designed games out there.

Each of these developments is somewhat surprising given the overall state of the video game industry. But within them you’ll find some of the most engaging categories and individual games available for mobile.

Nano Quadcopter A Must For Gadget Lovers.