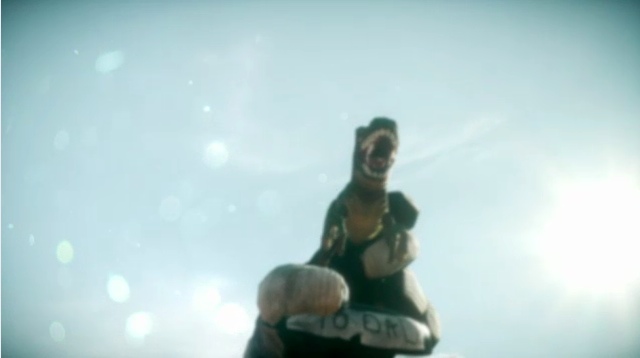 It’s not often we post individual bits of gaming happenings, as we try to showcase games as a whole rather than reporting on news. However, my favourite award winning game, Battlefield 3, is something i’m always researching. Today there has been a pretty interesting story circling the web.

If you play Battlefield 3, you no doubt know that there has been a rather high demand for a Dinosaur mode, potentially a rival to the Zombie games playable in Call of Duty. The DLC rumours have been fueled by the consistent appearances of toy dinosaurs in the current game, such as the toy dinosaur held by a soldier in the campaign, and several toy dinosaurs appearing in multiplayer maps. Despite this, DICE have never commented on the appearances of the dinosaurs, leading many to believe that it’s a lost cause.

However, yesterday DICE discussed the DLC with the community for the first time. Below is a tweet by the official Battlefield account on the topic of a dinosaur mode.

@zamielk No, at this time there is no word on a dinosaur DLC. Would you like one? And if so, would it be humans vs. dinosaurs? ^KB

Following this tweet, the Battlefield community exploded, leading the conversation to start on Reddit. But the discussion on the social news website wasn’t just fans getting hyped up at the news. The community manager of DICE contributed his statement to the conversation.

“Glad to see the enthusiasm. Really, though, if this is something you guys want the best way to go about it is to try to get #BF3Dinos off the ground on Twitter. If that sh*t trends it’s pretty hard to ignore.”

So, it looks like DICE might actually be creating the dinosaur mode. It might be a bluff, but it would’t hurt to try and get #bf3dinos trending.