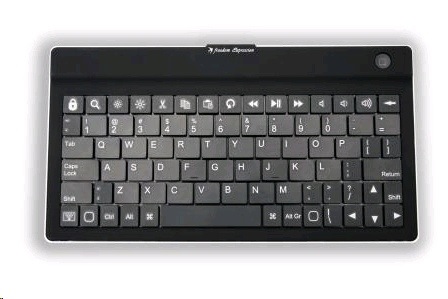 Bluetooth keyboards for iDevices cost quite a bit, meaning you will often struggle to find a reliable one for under £30. The Freedom Expression keyboard costs just under £40, which is a high price tag, but is it worth it?

There are certain aspects of the Freedom Expression keyboard that are lacking. For example, the design is quite boring when you compare it to the competition. For the past few months I have been using a Logitech keyboard with my iPad, which looks very simple but stylish. On the FE keyboard, the keys are very close together and there is a large space at the top which doesn’t host any buttons, but is there anyway.

Another place where the keyboard is lacking, is in key features. It lacks a built in stand which can be a turn off for a lot of people. However many cases at the moment come with a fold out stand, so Freedom’s decision to not include a stand can be a good one to those who already have a case that they like.

The battery life is very good, offering up to 300 hours of use in one charge. I haven’t used it for this long, but after almost three weeks of regular use, I’ve seen nothing to suggest that the battery life is falling.

The Freedom Expression Ultra Slim keyboard isn’t without it’s downsides, however none of them are deal breakers. As with most keyboards, your decision to buy it should be based on the typing style you should already know you have. People who are used to keys that are close together will love this keyboard, as it’s exactly what they are used to. However people who are more suited to keys that are far apart might take some time adjusting to the new layout. Overall, it’s a very solid keyboard for the price. There is no nonsense in the design, just a simple keyboard which offers a very large battery life so you can always trust it to work for you when you need it most.

FaceTime Voice: The Biggest thing you didn’t hear about in iOS 7