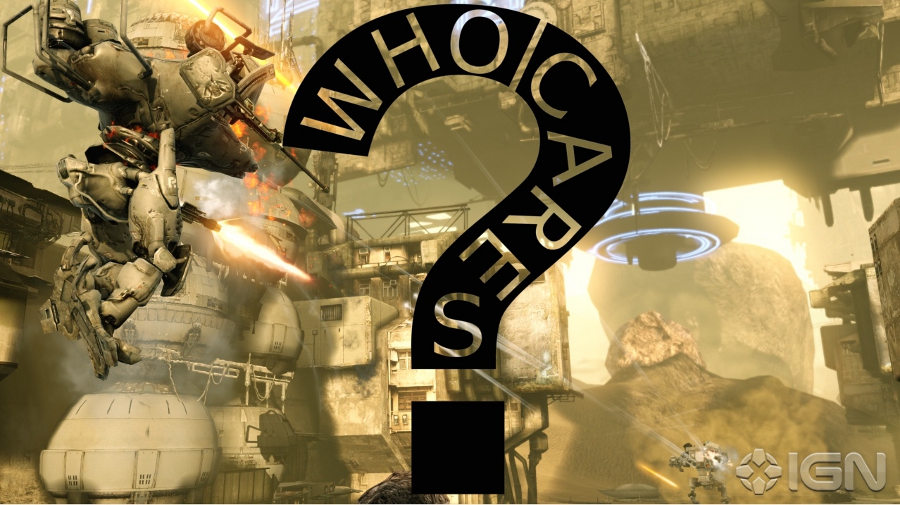 ‘Who Cares?’ is an ongoing feature where I, Stephen Weaver, look at the some of the hottest games not yet on the market, and give you the rundown.  Even if you don’t care, somebody has to.  This week, Hawken.

When someone describes a game as “MechWarrior for the weight and suspense, and Virtual On for the arcade style action,” you can’t help but cock your head in confusion and ask them to repeat themselves. That was what Jon Kruezer, one of the lead designers on Hawken, said as he shoved the hype machine of the internet into full throttle.  However, judging from all the previous trailers, he may not be too far off base.  In Hawken, you control a giant mech from a cockpit point-of-view, with the power to decimate enemies and destroy cities.  You can do this with Gatling guns, missiles, and all sorts of assorted goodies.  The difference between this and something like Mechwarrior though, is the speed.  Hawken is all about staying fleet on your feet, and making sure to keep at least two blocks between you and your opponents.  Because they will hunt you down, and there will be little mercy.

Hawken is being developed by Adhesive Games Inc., and had only been in production for nine months when the first teaser was released.  The production team had consisted of nine members at that time, three of those being interns.  Many of those nine came from Project Offset, a game Intel was producing.  The graphics engine witnessed in the teaser trailers had been lauded as particularly gorgeous.  The game was quietly cancelled in July of 2010, and as you can see below, it was a damn shame.

In March of 2011, Adhesive Games announced that they were developing Hawken, and attempting to bring back mech games.  And I have to agree, it’s about damn time someone other than From Software made a game about Giant Enemy Robots.  The trailer is incredibly impressive for such a small studio (only nine strong), and definitely wowed all publications major and minor.  The internet was thoroughly impressed with this offering, and Hawken got a ton of press coverage.  Some choice quotes:

Especially the latter, just slap that on the back of the digital box and Hawken will be good to go. Though no release date was announced at the time, excitement was growing to a fever pitch.  However, in reality Adhesive Games needed money, and in a move to fund the project, they decided to sell the movie rights to Hawken.  Yep, I know every face reading this just soured at the thought of another movie based on a video game.  Will they ever learn?

The “plot”: “As for the story, it follows two young pilots from separate clans pitted against one another after a devastating virus has covered most of the heavily industrialized planet surface in toxic crystal, creative director Dan Jevons told TheWrap. “They witness an event that suggests there is more to the nano-virus than meets the eye,” Jevons said. “Now the race is on to discover the virus’ origins and true purpose before their respective clans wipe each other out in a final, climatic battle.””

I’m just not even gonna deal with this.  None of this “story” has even been announced by Adhesive Games, and it’s goddamn multiplayer shooter.  What’s next, Tribes: Ascend picked up for a three picture deal? After this stupidity, two more trailers for the game came out which showcased some of the building weaving action.  You really just need to watch it.

In February it was announced that Hawken would be published as a free to play title under Meteor Entertainment.  The move was inspired by the runaway success of League of Legends, the DOTA-inspired game that made Riot hundreds of millions of dollars.  Not a bad model to copy.  Of course, this was quickly reaffirmed by the ten million dollars that was given to the Hawken team!  The money came from Benchmark and Firstmark Capital, who had also supplied money to Riot Games to get them started. Hawken also got a release date in the wake of becoming a million dollar production: 12.12.12.

With April came PAX East, one of the hottest venues for gaming news and previews.  Hawken was no exception, releasing a brand new cinematic trailer that showed a softer and more somber side, complete with orchestral score:

Press coverage still sizzled, as many gamers and outlets got their first hands on time with the game.  More back of the box quotes:

“You needed to play it. Everything just looks so right.” – Destructoid

In May, Gaikai announced their support of the game.  Gaikai is a cloud based gaming service that allows users to play graphically intensive games via web browser.  Gaikai will be releasing Hawken over their service prior to the official release date, giving gamers a chance to try it out before December.  However, no official date has been confirmed.

And with that, you are now fully caught up with Hawken.  With E3 just around the corner, I expect we will be learning even more.  But now, when your friends ask “What’s Hawken?,” you can now triumphantly say “A game that kicks ass and looks to resurrect the mech-combat genre.”  Or something like that.

For Who Cares?, this is Stephen Weaver signing off.  Celebrate E3 responsibly.