Kytephone is out of beta, hitting the Google Play Store yesterday. The free application creates an alternative user interface which is designed to keep children safe from some of the less suitable things found on modern smartphones.  The child’s phone usage can then be monitored by a parent or guardian, who moderates what can be done on the phone through an online dashboard.

The app is very simple to use. A parent signs up online or through the app itself with an email and password. Once signed up, you are logged into the new user interface which is completely impossible for a child to exit. Seriously, I have tried everything to get out of it. I’ve turned the phone off and have even taken the battery out, only to be greeted with Kytephone when the phone boots back up. It even blocks the Ice Cream Sandwich multitasking screen.

The idea behind the application isn’t completely new. We have seen child friendly tablets and phones created in the past, such as the LeapFrog tablet which is a complete tablet dedicated to children. However, these products are very limiting, offering their own apps which often lack the fun or quality of apps available to download for Android. Part of what makes Kytephone so unique is that it allows any application from the Google Play Store, provided the parent allows it.

How child-friendly the app is completely depends on how the parent decides to customize it. Controlled through an online dashboard, an adult can see just about everything the child does on the phone, and moderate everything that happens. For example, an adult can choose which contacts the child can call. There is no phone dial to call numbers which aren’t on the contact list which means there is no way that a child can call a number that hasn’t already been approved by his/her parent. The same rule applies for applications, as I mentioned above, a parent can allow absolutely any application to be on their child’s phone if they choose so.

The online dashboard is an online hub for parents to monitor their child’s phone activity, and it’s extremely impressive. You can see how long their son/daughter has been playing an application, see who they have called and even see their location on a very precise map. The parent can even see photos taken by the child almost the second they are taken, which can then be saved or deleted directly from the browser. 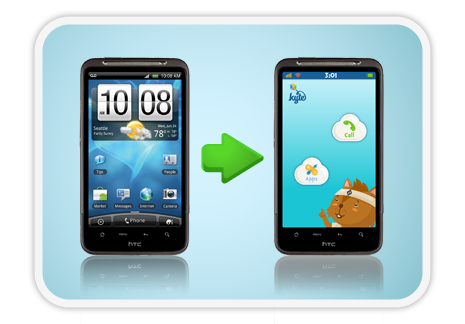 I contacted Martin Drashkov, a Co-Founder of Kytephone to discuss the app. If that name rings a bell, it’s the same Martin Drashkov who created the 23″ MegaPad last summer.

“The response has been great so far because Kytephone offers a well-executed solution to a real problem a lot of parents face.”

“We like to call it “Kid’s first smart phone” since once app takes over, it’s hard to tell that it’s running Android underneath.”

I asked about the future of Kytephone, it seems like a great start but there is still quite a lot missing. Luckily, Martin was on the same page as me on what could be added in the future.

“There’s many features we’ll be adding in the future, both on the phone app to make the experience better for kids and on the dashboard side to make the experience better for parents.  On the app side we’ll be adding SMS messaging along with the same parental controls as making phone calls, while for parents we’d like to introduce more advance parental controls, such as time limits on games. So parents could say “only 1 hour of games per day” or “no gaming during school hours” or both.”

We also discussed the fact that, while it’s currently great for small children, the theme is very limited and older children may want to change the design to make it look less childish.

“Our aim is to have a phone with all the usual features found on regular adult-phones (phone calls, photos, sms, web browsing), but each feature having parental controls.” “For older kids we’d like to be able to provide a version of Kytephone without the child-friendly UI, but with the same controls available to parents.”

“Kytephone today is great for young children, but older kids would resent having to use a kid’s product. At the same time, a number of parents have expressed interest in having the same parental controls, but for teenagers, so there’s definitely a need there. It would be the same app, except parents can easily customize it from the dashboard to make it appropriate for different ages.”

Unfortunately, there are currently no plans to bring the app to iOS or WP7, here’s what Martin had to say.

“No, we don’t have a plans for other platforms. Apple for example would not allow an app like Kytephone that takes over the UI on the App Store. But we think that with Android’s popularity and the number of affordable devices, it’s the best platform out there.”

There is a chance that in the future, Kytephone may come to Android tablets.

“Well, it’s something we’ve looked at and we can do it, but for now we’re concentrating on making a really great kid’s smart phone.”

Kytephone is available for free from the Google Play Store. Despite being accidentally listed as ‘beta’, the version currently on the store is the full version.