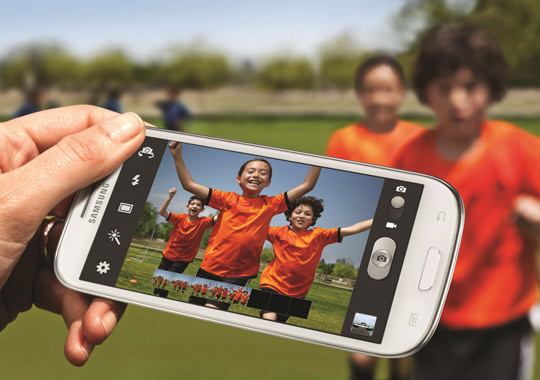 Following months of leaked images, details and speculation, the Samsung Galaxy SIII has finally been annonced at Samsung Unpacked 2012.

The design looks like a cross between the Galaxy Nexus and the Galaxy Note. Packing the beautiful shape of the Nexus, with the huge screen of the Note. I’m not sure why, but it reminds me of this Mozilla Seabird concept

Intelligence
The Galaxy SIII ‘predicts intelligence’. One of the ways it does this is with something called ‘Smart Stay’.

Smart Stay is almost creepy. The phone watches you using the front facing camera to identify whether you are looking at it or not. if you aren’t looking at it, the screen goes off, if you look at it…you get it.

The SIII comes with a voice feature, which lets you say ‘Hi Galaxy’ to turn the phone on. Then it becomes similar to Siri, in that you can ask it questions such as the weather. The voice recognition can also launch applications, such as the camera which was used in the demo.

Also new is Direct Call. ‘The instant you raise your Galaxy to your ear, it knows you want to call the person you are texting’. This is done with proximity sensors.

Smart Alert is a new feature which will alert you to any missed calls or texts you have as soon as you pick up your phone.

Social Tag is an addition to the Gallery which automatically finds your the people from your photos with their social network accounts, so you can tag them quickly.

S Beam is the new version of Android Beam we first saw with the Galaxy Nexus last year. Using a new Wi-Fi direct system, you can hold two phones together and tap the item you wish to transfer, which is apparently very fast.

Using, the SIII can recognize any of your contacts in any photo you take, and give you the option of sending them the photo as soon as you have taken it.

The Galaxy SIII is measures in at 8.6mm thick, and comes in blue or white (surprisingly no black). The new TouchWiz 4.0 interface is inspired by ‘nature and human emotion’. Nature UX uses natural sounds and live wallpapers to bring you a very relaxing experience. It also comes with an information lockscreen, which displays the weather and news before you unlock it.

One of my favourite features from the announcement is Pop Up Play. In the last few weeks we have seen true multi-tasking come to the iPad in an application which allows you to have more than one window open on the screen. A feature like this is going to be available on the new Galaxy, and will allow you to have a video playing while you search the web or text. Pretty amazing.

Samsung have introduced an ‘intelligent camera’ which has zero shutter lag, and takes less than a second to load up. The camera can take up to 20 images in a burst shot, and uses a new service which finds the best photo out of a burst of 8. I wonder how well this will work.

The camera also has an 8MP camera. Not as ground breaking as some of us may have hoped, but pretty good. It also comes packed with a HD front facing camera for brilliant quality video calling. Yet another feature of the camera is a feature which allows you to take a still image while you are videoing.

The super HD AMOLED 4.8inch screen is a lot bigger than the SII. They’ve done this by only expanding the size of the actual device a little bit, and greatly reducing the bezels.

Please note that I have written this article whilst watching a live stream, and will tweak it when I can.

Samsung have really outdone themselves. Earlier this year Samsung took part in an ad campaign which saw them basically make fun of Apple users as the waited outside an Apple store. I thought they were sort of clutching at straws, as they both had good features and the SII wasn’t so superior that it could be held high above the iPhone. However now, they can do that advert campaign and it would work.

The SIII has some ground breaking features, provided they work. I can’t wait to get my hands on one to try, the amazing design of both the user interface and the actual phone makes this one of the best sounding phones of all time.