Most tweeters on the Android operating system are no strangers to Boid, a ‘holo’ themed twitter client which has been in Alpha and Beta stages for quite some time now. They’re probably also aware of Tweet Lanes, a similar styled application, however which (in my opinion) lacks the same polish as Boid.

Now there is a new kid in town, and he’s called TweetLine. Just like the two previously mentioned apps, Tweet Line is designed to comply with the Android design guidelines introduced alongside Ice Cream Sandwich. However, TweetLine doesn’t require Android 4.0 and can be used on devices running Android 2.1 and up.

I haven’t tried it out myself yet, however reviews from around the web seem very promising. Here’s a full list of features and things to come in future updates;

Implemented functionalities
– Notification of new messages, mentions
– Pull-to-refresh to refresh each column (timeline, direct messages, mentions)
– Register the last tweet you read in the timeline to always find your tweets as you had left them
– Sharing pictures with TwitPic, Yfrog, Lockerz and pic.twitter
– The colorbar which allows you to assign a color to a user, a colored bar will appear on his tweets in your timeline
– Integration of a url shortener: bit.ly
– Preview images in tweets as thumbnails, and can see the image full screen by clicking on it (with zoom support)
– Configurable action on the support along a tweet
– Android 4.0 themes available : Dark, Light, Light & Dark
– Change the text size and color of tweets
– Autcompletion on friends name
– Display the renewal hour of your API requests
– Edition of your profile
– Search tweets and users
– Mute tweets based on hashtags, an expression or a person 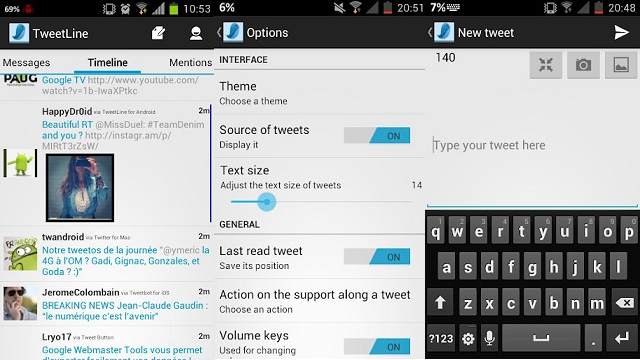 New GTA V Screens Looks Too Good To Be True