A Fashion Company based in the United Kingdom has been left red faced today (20th) after using #Aurora to promote a dress available on their website. The topic became a wordwide trend following the the shootings in a Dark Knight Rises premiere which left 12 dead earlier that day.

Celebrity Boutique used their Twitter account to tell their 42,000 followers of a dress available at their store by tweeting the message below. 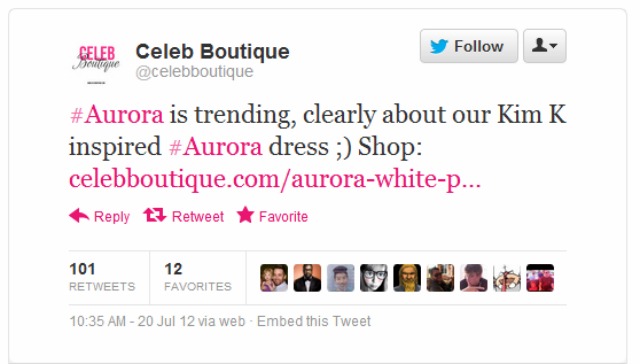 As if it wasn’t already obvious after making the mistake, the company failed to remove the tweet very promptly and it was left on the social networking site for just over an hour, prompting thousands of retweets and hate messages directed at the account. A Facebook page was even set up targeting the company demanding that people e-mail their press contact to make their feelings known, as of writing this the page has 70 likes.

Once the tweet was eventually taken down, they replaced it with a series of messages apologising for the mistake.

“We are incredibly sorry for our tweet about Aurora – Our PR is NOT US based and had not checked the reason for the trend, at the time our social media was totally unaware of the situation and simply thought it was another trending topic – we have removed the very insensitive tweet and will of course take more care in future to look into what we say in our tweets. Again we do apologise for any offense caused this was not intentional & will not occur again. Our most sincere apologies for both the tweet and the situation. – CB”

All credit to the company for apologising, however I find it extremely hard to believe that nobody within their PR was aware of the horrible shootings in America. I myself am based in the UK and have seen numerous news reports and articles since waking up this morning.

This is a lesson to every company that it can be social media suicide to get on the wrong side of the internet, be it on purpose or by mistake. Always check what you are tweeting.