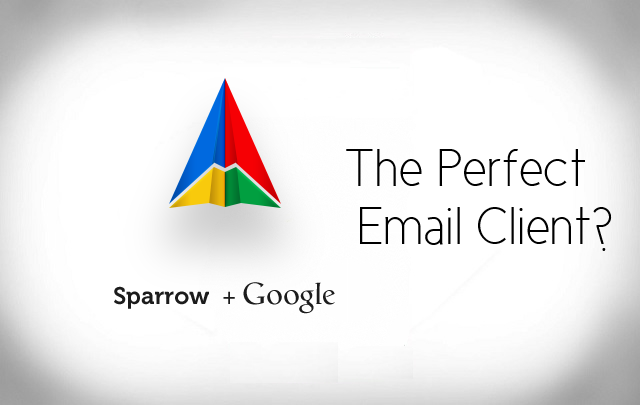 Today in a somewhat shocking statement, Sparrow announced via Twitter and e-mail that they had been acquired by Google. There was no talk of this happening and has caught everybody off guard. Interviews and updates to the story are flying left right and centre about how much the acquisition may have cost, but I’m more focused on what it means for the user rather than the company itself.

I’ll begin by stating the obvious, that Sparrow is an Apple only company that until now have shown reluctance to begin developing on Android. The small team which consists of only five members have only released their successful e-mail client on iPhone and Mac, with the intention of releasing an iPad version in the near future.

Now many people would have hoped that by purchasing Sparrow, Google aimed to bring the entire application over to Android. But instead, Google just want the talented folks who made the application to shed an insight as to how to make Gmail simpler yet more effective.

“The Sparrow team has always put their users first by focusing on building a seamlessly simple and intuitive interface for their email client. We look forward to bringing them aboard the Gmail team, where they’ll be working on new projects.” Google told The Verge.

In a statement made by Dom Leca, the CEO of Sparrow, he informs users that the availability and support of Sparrow applications will not change following the acquisition.

We’re excited to announce that Sparrow has been acquired by Google!

We care a lot about how people communicate, and we did our best to provide you with the most intuitive and pleasurable mailing experience.

Now we’re joining the Gmail team to accomplish a bigger vision — one that we think we can better achieve with Google.

We’d like to extend a special thanks to all of our users who have supported us, advised us, given us priceless feedback and allowed us to build a better mail application. While we’ll be working on new things at Google, we will continue to make Sparrow available and provide support for our users.

We had an amazing ride and can’t thank you enough.

Personally, I’m quite disappointed. I love the idea of using an application like Sparrow for the reason that it feels home made. Having a small team of only five people may mean that they will have trouble with updates or keeping up with the demand, but it also means that they will pay more attention to their community. The Sparrow applications have always had a very nice design, one which will most likely be hidden under a lot of Google branding. This, combined with my disappointment at the fact that it’s now unlikely we’re going to get a Sparrow iPad application has resulted in me quite disappointed by the news.

That said, I love Android, Chrome and Gmail, so if any company was going to buy them, I’m glad it was Google! I’m sure they will use the tips and design put forward by the Sparrow team to create a truly amazing email application.

As always, leave your opinions below. Are you happy with the take over or do you think Sparrow should have remained independent?