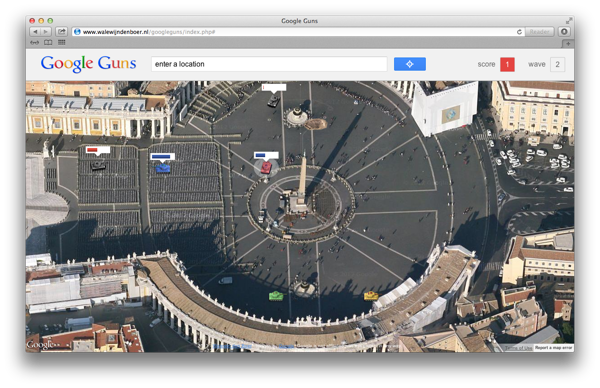 Google Maps is without a doubt the best map service on desktop, mobile or tablet. But it’s missing one thing. War.

Yes, since the rise of Call of Duty, Battlefield and other war games, absolutely everything has to be modified to have a violent twist, and Google Maps is the latest service to get the treatment.

Google Guns is a relatively new website which lets you position a fleet of tanks anywhere in the world, and unleash havoc on another team of tanks which are controlled by the computer. In most open spaces it looks quite good, however in streets you’ll find your tanks simply drive over the houses and buildings as if they weren’t there at all.

If you have the January blues, this little game might just get you through the working day.

Google Guns can no longer be accessed by visiting the URL below. I reached out to the game’s creator who told me that Google had contacted him requesting it to be taken down. However he is confident that the reason for this is because the game used Google’s logo, and he plans to relaunch the game in a ‘slightly different layout’ in the next few days.