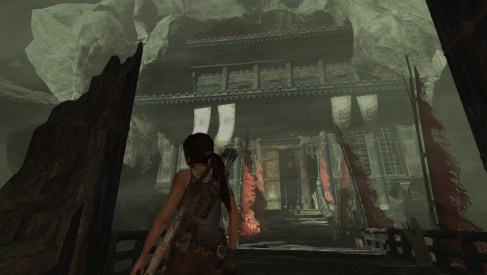 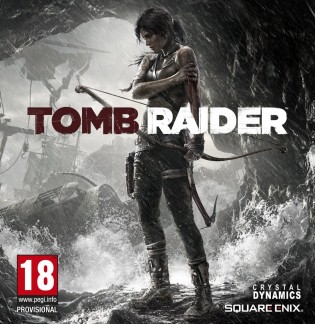 To say Tomb Raider is brutal would be like saying Hitler wasn’t caring. Set in the Dragons Triangle (South Japan) you play out the origin story of the badass we all love Lara Croft, only she’s not quite the awesome Lara most will know her for. Thats a far cry, you play the young hopeful archaeologist Lara Croft, which gives the game this bitter sweet flavour to it – I want to be that badass Lara I knew when I was young…. but she’s going to have to be beaten to a pulp first (very cruel to be kind).
As the bright eyed, eager and clean behind the ears Lara starts out she’s on a boat, but that won’t last long, its unfortunate you can’t play the opening scene as I feel it would certainly help give some panic to the game and disorientate players as they try to flee and now sinking vessel as well as learn to get to grips with the world of Tomb Raider, unfortunately this isn’t the case. That isn’t to say however you miss out, whilst Lara fights to reach the shore you are able to admire the beauty that surrounds you which is a brilliant dynamic that I feel never ends as each new area in the game feels very different but also at home and just in the right place.

Looking at story I’m actually very happy & always intrigued. Given Lara is an archeologist many of the things she was originally trying to find before `you` arrived are shrouded in legend and myth which does lead to some very interesting questions you’ll end up asking, such as “holy hell what’s that batman?!”.
As well as the Myth and curiosity side of Tomb Raider there is Lara’s own progression which as I already said is brutal. Lara can die in well over 100 ways I bet and the cinematic ones (as opposed to you falling off a cliff for whatever reason – you saw something shiny, took acid and thought you could fly, whatever it is) are particularly gruesome what with pikes being thrust through Lara’s Jaw and up up up through her skull all the way to being caught in a cave where a boulder is going to squish her spine like a boot does an Ant. Lara’s journey is one about realising who she is and what she is capable of and most definitely what she can take on (To everyone who said its sexist and the Dev’s just want to see Lara in pain – you’re the one not finishing the game and making Lara the victor, the badass, the legend). Seriously though as someone who thought they could take gruesome images – virtual ones made me squirm in my chair and be determined to beat the game.

Looking at the story of the island and not so much Lara, I eventually got a sense of being almost in Lost (which subsequently made me decide to pick up from Season 4 and finish the blasted series). You are not the only inhabitants of this Island. There are `others`, these others initially cast a new look at the game, who can you trust? which quickly is answered by gunfire – so not them. The others are a cult of some sort lead by a Father Mathias – you’ll find many paintings over the island on rock faces (some just to help you) that are creepy – “Fear the demons”, “Father Mathias set us free”, “The storm is watching”. These messages feed the idea of myths and legends, some sort of cult and also a sense of being stranded even more than you realise with that last one, add in the games very good soundtrack that creates the feeling of unease very well and the smallest sound will freak you out – the game in quite a clever manner always seems `too quiet` in that hollywood sense of “I’m going to get jumped any second by something”.
If you do find yourself enjoying the story of the island I implore you to search for the relics hidden in each area (documents from periods of time & items from the eras) all of which add a layer of extra unease of that the Island is `aware`.

Tomb Raider really does have a lot going for it in terms of story, in terms of gameplay apart from being pulverised Lara will as time goes on gain access to some very useful pieces of kit, my favourite of which is the bow – she does get a pistol but not the dual ones that seem iconic with the TR brand.
These new pieces of kit make combat easier & also allow you to traverse the island to larger and larger degrees and allow you to go back and collect what you may have missed – which can be annoying but the game quite awesomely links up previous area’s at times, so that Camp you came across 2 camps ago, is only 1 minute from the one you’ve just found. This is a nice addition to a game that has the mechanic of “go back and explore” as they make it easy on the player which not many games do.
Upgrades for your gear is found through story and also through something called Salvage which can be gained through crates, animals & others (providing you have certain skill points), you collect salvage and when you have enough you can improve your pistol/rifle/shotgun/bow at camp. Upgrades are relatively bog standard for the most part – larger mags, higher accuracy at longer ranges etc.
You can also upgrade Lara through Skill Points which can be spent in 3 areas Survivor (focusing on extra xp & loot from kills), Hunter (better adapt and dealing with guns) and Brawler (looking at things like taking higher amounts of damage).
Both Skill Points and Upgrades are done at Camp. Camps are found throughout the game and generally define an area (i.e. 1 per area almost), here you can upgrade gear and Lara, Lara can record her journal and also you may fast travel between camps (not always necessary as the map does link up with previous camps as I said above).
Moving away from Camp, each Area in the game as well as having Relics/Documents also has challenges – light all 10 statues, break 6 lamps etc. This does mean that each new area can seem daunting as there are many collectibles, there are the challenges and also the actual story, so it can be a bit uncertain at first as to if you have found everything. Luckily however Lara has `Environmental Awareness`, this means that a tap of the Left Bumper (or whatever key) will instantly highlight areas of importance (and items given the right skill points) and have you quickly back on the right path which is very helpful as the game continues.
Finally fighting in Tomb Raider is fine and flows quite well, however when in cutscenes Tomb Raider decided to use Quick Time Events which always have me on edge. However they are used few and far between, at appropriate moments and without having to mash a button faster than Usain Bolt running the 100m. My only qualm with the QTEs in this game is that they are all the same button which does mean instead of being surprised by a random `B` or `X` I just have to time hitting `Y` and its just not as immersive.

Overall Tomb Raider is a great game and a welcome return to magnificent form, a must buy for everyone (especially with the Steam Sale imminent), the story feels like legends stepping out of a book and Lara finding her feet through blow after blow.
Truly enough good things can’t be said about the game.
Thank you so much for reading
Fred

So, i'm pretty much going to be posting mainly my reviews of games i've played recently. I always apprieciate a debate on games I enjoy and love any feedback given, a score's cool but without feedback i don't know how to improve... anyway yea I'll be doing that where and when i can. My interest with games has been there since i was a child. My first memory is of me, my dad and my eldest sister playing Sonic on the Sega Mega Drive, its the only console from my childhood i've managed to lose :( I used to play James Pond and Mega BomberMan on there. From that i progressed to the N64 and the obvious titles like Legend of Zelda Occarina of Time and Super Mario 64. From that I went onto the Dream Cast where i fell in love with Soul Reaver, Rayman 2 and Space Race ;) After that i got into what you'd call modern gaming i suppose as i got a PS2 and my first game was Jak and Daxter, boy how i loved that series and Final Fantasy 10 (I know older fans of the series find that heresy but i was like 10 so i loved it!), and i almost forgot Metal Gear Solid 2 & 3. From there it was onto the Xbox where titles like Halo & Timesplitters Future perfect & Hitman kept me entertained. Then onto the now dwindling current Gen xbox 360 where Halo was played with even more love, borderlands emerged, Assassins Creed was created and Mass Effect began and the `fast food` equivalent of games Call of Duty 4 swept the consoles. Now here I am, a live time of characters, stories and love for each of them wrapped up in a young dude hoping to get into the Game Creation industry himself.... so yea Hi! ;) Please check out my podcast "The Magical Fun Bus" found on podomatic, most podcast directories and iTunes, our twitter is @magicalfunbus